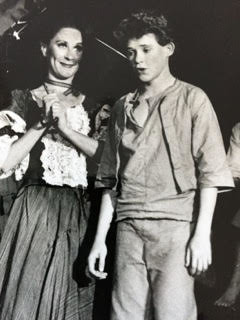 ​One of the world’s greatest pop vocal groups and a true international success story, Human Nature, have agreed to be our Patrons, almost 30 years after beginning their performing careers in musicals with us!

Friends from an early age, Toby Allen, Phil Burton, and brothers Andrew and Mike Tierney performed together in our 1995 production of West Side Story. Years earlier, Mike also performed the titular role in Oliver, (pictured right with Sharon Babcock, nee Dermody) which we are presenting again at The Bryan Brown Theatre this July, 25 years later!

Mike said, “community theatre is a fantastic way young people can gain a great sense of teamwork, make new friendships, help build self confidence, and learn new skills. It’s a great introduction into the world of performing arts in a fun, welcoming environment. I learnt a lot from my time performing at Bankstown Theatre Company and really found my love for the stage,”

Toby goes on to say, “community theatre is such a wonderful place to promote confidence in young people, getting the opportunity to work along side others that share a love for the performing arts. It also shows them that when people from all walks of life come together in the community, they can work together to create wondrous pieces of entertainment."

Edward Rooke, President of Bankstown Theatre Company, said, “we are delighted and honoured to have Human Nature bring their talent and influence to our company. Their sense of community and humble approach to their career has been nothing short of inspiring. These are four men that have never forgotten their roots and who have always generously nurtured talent during their busy career.”

Human Nature currently reside in Las Vegas where they perform their headlining hit 'Jukebox' show, 5 nights a week at The Venetian. They also recently undertook a national Australian tour in February as part of their ‘Ultimate Jukebox Tour’ following the success of their #1 album, ‘Gimme Some Lovin’ Jukebox Vol II'.

Click below to hear our world famous alumni talk about why they are honoured to be the 'Patrons of Bankstown Theatre Company.'